I’ve said from the beginning – or August – that Grave’s includes a few perks, one being its perfunctory litmus test of human character. When I told a gentleman caller I’d been diagnosed and he opted for “Sorry you’re not feeling well” before reverting communication back to the (questionable) stress of his job, I could almost see my text screen turning blue. Grave’s Disease. Not A Cold.

Because I choose to live in New York, where things like sublets and leases and extortion get in the way of living in the same place for extended periods of time, I moved out of my apartment at the end of August.

It wasn’t a tragedy. My room didn’t have windows or a closet, and ventilation was tentative at best. With Grave’s my new body temperature was scorching, at least. I didn’t have the energy to deal with procuring a new residence but I did have relatives willing to take me in for a month while I did my best to kind of feel better and feebly make my way through Craigslist. I saw one, two, then seven apartments on a scale of Meh to Terrifying.  I almost put down a deposit on one closer to the Meh side of things but something weird, gut-level stopped me. It was Thursday afternoon, fall light setting in – I walked along the Brooklyn sidewalks, past rows of houses that reminded me of the Midwestern suburb where I was born. Am I supposed to be here, I asked, to no one.

The next morning, a Friday, my boss called me in for a meeting. “We need to see you’re willing to make performance improvements.” Or Else.

Seriously, am I supposed to be here?

I was now dangerously close to not having a job, a place to live, but one hell of an insurance-dependent, hormone excessive medical condition. Oh, no. And try as I might the monologue from Dumb & Dumber refused to stop popping up.

I cried. I considered quitting, everything. Maybe it’s time to move, anywhere. I didn’t move. Or quit. But I did rant about moving and quitting.

Then a piece of mail showed up. 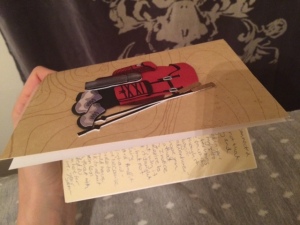 It came from my friend Sam, who’s prone to showing up and reminding me of what it’s time to do (write) when I’m too busy lamenting the fact that I don’t do it enough.

“A very big change has happened in your life, and I commend you for trying to take it in stride the best you can, for using even illness as a way to move toward a future Caira you desire. But though it is brave of you to pick up and begin again – to try to see things as “adventures” to the extent that you can – I hope you know that you don’t need to do that unless you want to. One thing I notice in your writing, often, is your desire to explain what something meant, why it had to happen that way, what it taught you. That’s all well and good, but not everything teaches you anything. Sometimes, things are just hard. And if you triumph, despite things being hard – which I know you will – it’s not because you needed things to be hard in order to triumph. It’s because you would have triumphed anyway. And it’s OK to admit a wish that things could have been less hard.”

It’s true that another perk of illness brings out the best, in your friends, in your relationships. There’s something about really needing something – and by something I mean help – advice or input or a couch to sleep in or the name of a doctor, that forces you to just stop amidst all the bullshit and say thank you.  Because when you’re crazy and Gravesy and don’t have a place to sleep and you might lose your job, you’ll know who you can call, just as you are. It’s humbling and uncomfortable but it puts it in perspective.

But Sam has a point. And what she said to me, so beautifully, is what I’d wanted to say to myself, and hadn’t. It is hard. Sometimes the silver lining of seeing bad dates and good friends for who they are dims behind the mundane reality of muscle atrophy and mood swings. Sometimes I don’t feel like making sense of it.

Sometimes a friend shows up and I don’t have to.

3 thoughts on “From California, With Love”